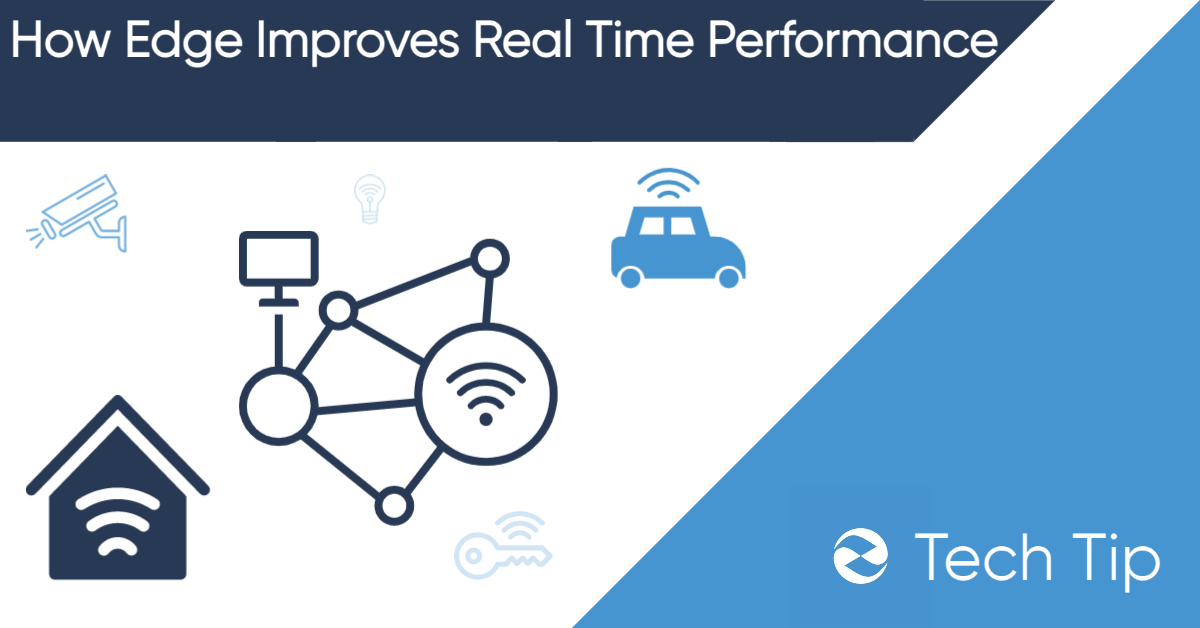 Edge Computing and how it can improve real-time application performance

Edge Computing is a type of distributed computing paradigm where data storage, information processing, and networking is brought closer to the people and devices that consume that information. Why is edge computing important? To answer this question, let’s understand a few terms necessary to the topic of edge computing.

Edge Computing and the Cloud.

Over the years, the technology space has seen great advancements. A term you have likely heard a lot about is the cloud. Edge is related directly to the cloud so it’s important we establish what cloud is first. The cloud can be defined as groups of central servers with nearly unlimited storage and computing capabilities. This near-infinite scalability has led almost all enterprises and organizations to adopt the cloud in some form. The cloud offers tremendous advantages and possibilities beyond just scalability such as great computational power, big data processing, redundancy, and more while keeping costs low. The cost is comparatively lower than on-premises data management because enterprises avoid the costs of operating an in-house data center since the cloud vendors manage the servers and allocation of computing resources for them. Moreover, whenever there’s a spike in traffic, the cloud vendors can scale your application’s resources accordingly, ensuring consistent, reliable performance.

IoT devices and the Cloud

While there are many advantages to the cloud, the cloud isn’t suitable for all applications. Some applications require devices that are decentralized, focused on a single task, and closer to users in order to reduce latency. The increasing need for such devices has led to the rise of one of the most popular examples of edge computing, the Internet of Things, commonly abbreviated as IoT. IoT describes a network of physical devices that are embedded with sensors that transfer information over a network to a central hub for processing. The sensors also receive information from the hub and act on it without any human interaction. A hub in this case is just a server with the necessary software to store and process information.

A smart HVAC is an example of an IoT device – it comes with multiple sensors that can pick information from the environment such as the temperature of the room, the air condition, etc. and act on it, for example, it can automatically turn the heat up or down, or maintain a certain level of air condition depending on the information its sensors received from a weather forecast station.

To properly function, IoT devices work with real-time data. The Device’s sensors need to collect data, send it to the hub for processing, and get the result in real-time. The market for IoT devices illustrates the demand for de-centralized edge devices. Currently, there are over 22 billion IoT connected devices around the world that are continuously exchanging information, and the IoT market is predicted to grow to 1.6 trillion US dollars by 2025.

But why is there so much growth opportunity for IoT? It all comes down to latency. Latency is the measure of time it takes information to travel from one point to another and back over the internet. For IoT devices to properly function, the latency must be minimal to none. When billions of devices are connected over a network, the latency tends to increase, resulting in poor application performance, or some IoT sensors receiving stale information. For businesses looking to deliver the best performance in the market, It’s crucial that they deliver data with as minimal latency as possible. While IoT is a classic use case for the edge, cloud providers are also looking to take advantage of the edge.

But most users (and their devices) are dispersed globally, including remote locations with limited internet connectivity. Achieving real-time data transmission that IoT devices and real-time applications expect becomes a problem when you are using centralized cloud data centers. Your application will experience high latency, which is unacceptable for IoT devices and applications that depend on real-time data. Because of these shortcomings, edge computing comes into play.

Edge computing describes bringing the cloud to the users. Instead of having a central region with servers and data centers, like in the case of the cloud vendors highlighted earlier, the cloud is installed closer to the users and the devices that will be using the data and resources on the cloud. Edge computing ensures reliable and consistent performance for real-time applications and IoT devices.

We can demonstrate the use of edge computing, here are some real-world examples:

AI-powered self-driven cars take in a massive volume of data from their surroundings to work properly. It’s imperative this data is processed in real-time with zero latency. High latency from a traditional centralized cloud setup could result in accidents and damage. Edge computing offers a valuable solution by minimizing latency.

Smart home devices also take in a lot of data. Just one home could have over 10 smart home appliances, with each appliance having hundreds of sensors. This information needs to be transmitted and processed quickly. If you are just relying on a cloud computing solution, the network load would be too much resulting in delays and poor performance. For example, a smoke sensor detects a fire – using that information, it needs to send signals to the firefighting department, medical department, etc. to initiate an emergency response. If there’s a network overload, some packets could delay or get lost in transmission resulting in a delay in initiating an emergency response. With edge computing, the servers are close to the devices which minimizes latency as much as possible.

Medical devices such as heart rate monitors transmit a massive amount of information to doctors about a user’s body in real-time. This information is crucial to monitoring the health of an individual and latency can be deadly. By incorporating edge computing, data can be transmitted in real-time closer to the healthcare location and result in minimized latency.

Edge computing is especially useful in industrial manufacturing setups. Robots, for example, need to capture information, have it processed, and use it to make decisions in real-time. Another example is an application that monitors the safety of an offshore oil rig. These devices are critical for meeting production and compliance metrics and a cloud that could potentially go offline presents a risk. The safest option is to install computing resources at the edge location.

Hybrid Cloud Computing is a great implementation of edge computing. You can have your application running partly at the edge location and partly in a cloud vendor’s data center far away. For example, information from an IoT device can be generated and analyzed locally for real-time decision-making, and the data moved to the cloud’s data center for further processing.

Is Edge Computing Necessary for your application?

If you are developing real-time applications or working with IoT devices, then edge computing is necessary for the performance of your application.

In a normal cloud computing setup, data migration, bandwidth, latency, and connectivity involve considerable costs. You can minimize such costs by using adopting the edge. This can be highly efficient for IoT devices that generate massive amounts of data.

If you are developing applications for users in locations far from any of the regions where the cloud vendors’ data centers are located, then it may be advantageous to look into an edge hybrid cloud setup so that data can be cached and stored closer to your users.

Are you considering installing a cloud at your edge location? ZebraHost installs dedicated clouds at edge locations with tailored solutions to meet varying users and application needs.

By bringing data storage and computation power closer to the people and devices that consume the data, you minimize latency issues and hence improve the performance of applications, especially those that depend on real-time data to function properly. If you are running applications that control critical systems, using traditional cloud computing solutions with high latency is not acceptable. You may want to look into installing the cloud in the edge locations where your devices and users are located.