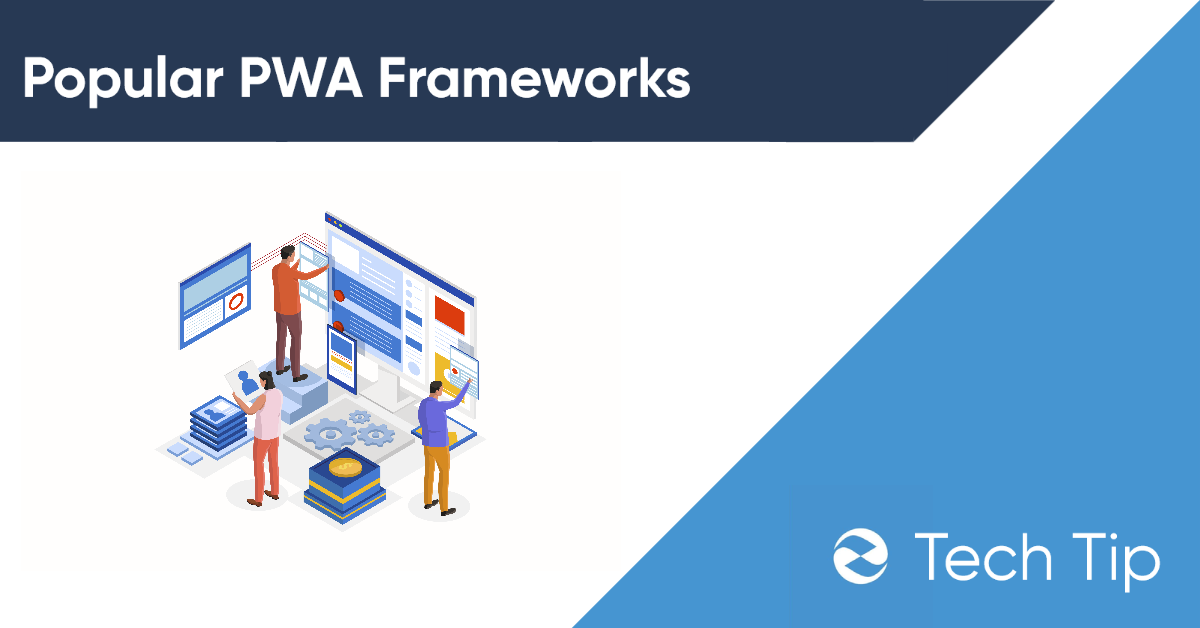 Progressive Web Applications, many argue, are the future of web development. Progressive Web Applications (PWAs) allow developers to build a single website that can be served in a browser, a web view, a desktop app, or a mobile app. PWAs behave like responsive websites but have additional features commonly found in apps such as notifications and background data sync.

Progressive web applications have been gaining popularity because PWAs allow developers to build a website that has the functionality of an app. This allows developers to develop the website once, then make it available across multiple platforms. Modern frameworks even allow developers to publish these sites as apps on app stores.

Here is a breakdown what a progressive web application is and the most popular frameworks used to develop PWAs:

What is a PWA?

Progressive Web Applications (PWAs) are websites developed to function like an application. They share features of responsive web design like the ability to adapt to different screen sizes along with features commonly found in native apps like notifications, caching, fast loading, and background sync.

The greatest advantage of PWAs is that they only need to be developed once for multiple platforms. It will then be served as a web page, a webview, desktop app, or mobile application. PWAs save organizations time and money because the basic code only needs to be developed once, and depending on the framework used, either works almost natively with other platforms or can work with some small tweaks.

What Makes up a PWA?

PWAs generally consist of a backend that uses technologies like Java or PHP. A front end created from a Javascript framework, and HTML/CSS.

There are 2 files types that are required for a PWA to function:

- The manifest file: a JSON file containing all the code that determines the look at feel of the app. Such as colors.

- The server worker file: A Java script file that works with the browser to create a layer between the application and the network. This allows for the “app functionality” in a PWA such as notifications an background sync.

What make a PWA different than a responsive site?

Both PWAs and responsive sites can adapt to different screen size and device types. However, PWAs have the added advantage of “app” functionality like push notifications and background syncing. PWAs also tend to have a higher quality look and feel when there are interactive components making up the web page.

For example, a perfect program for a PWA vs a responsive site would be a travel site. The PWA version would have higher quality data entry fields, sync in the background, and push notifications to the user such as flight price changes. Data would update on the page without needing to refresh or requiring visitors to open a new window to see results.

Should I build a Responsive Site or a Progressive Web Application?

Progressive web applications are best if your needs meet any of the following:

- User will interact with data hosted on a database

- Want to create a single app for all platforms

You should consider a responsive site if you meet the following:

- Need a site as quickly as possible

- You lack development experience and want to build yourself

- The site will primarily be informational or a blog

- Site will not have many interactive elements

- You do not want to incorporate a database

- Site must be cost-effective

React is a java script framework maintained by Facebook. It has become one of the most popular ways to build PWAs thanks to its emphasis on simplicity. React specializes in allowing developers to create simple one-page web-apps that can change and modify data without reloading the page. On the React site they have an example To-Do application you can test out.

React is a go-to for developers and businesses that want to build a relatively simple one-page application that can serve users data without needing to refresh. Scheduling pages, lists, data entry page etc. are all great candidates.

Vue.Js is a JavaScript framework similar to others like Angular and React. But it sets itself apart mainly in that it is Reactive. This means that as you make changes like setting variables, the Vue.JS UI will change.

Vue.JS has experienced tremendous growth since its inception in 2014 because it is arguably the most approachable JS framework. Vue.Js has a strong community, helpful documentation, and integrated ecosystem of development tools. These tools make it so a new user does not have to stray far outside the code Vue.JS interface.

If you have prior experience working in HTML/CSS and JavaScript but want to learn a framework, Vue.JS will likely be the easiest to pick up.

Angular is a type-script-based front end that was developed by Google. Angular was actually entirely re-written in 2016 so that it could compete with the more modern React framework. Angular focuses mainly on allowing developers to work with elements independently and making code re-usable. It does this by unbinding dependencies from objects and using a hierarchical structure so that dependencies can be applied to entire subsets.

Angular is excellent for web developers that are focused on SEO. Angular renders the view on the server which speeds up loading from the users’ browser end. Search engine crawlers are also provided a pre-rendered page so that search engines can crawl the page before it completes loading. These contribute to speed which directly enhances SEO. Furthermore, not that there is an advantage because of it, but Angular is developed and maintained by Google which has an interest in developing technologies catered towards making search more efficient.

There are two main drawbacks to Angular. The first is that because the framework was re-written entirely in 2016, many developers are skeptical towards the future of Angular. This has resulted in a conflicted and apprehensive community. The second is that Angular provides everything needed to develop a front-end web app from the beginning so it is very difficult to learn compared to other technologies like Vue.JS or React.

You should pursue Angular if you have experience previously working in the old Angular or have a particular focus on fast-loading, SEO optimized sites.

Ionic differs from other JavaScript frameworks on this list in that it’s focus is on building hybrid apps. Hybrid apps are web apps that are fed through a web view. Web views are essentially web browsers incasing the app. This allows Ionic hybrid apps to work on virtually any operating system. There is no need to rebuild the app in a native SDK. This allows developers to reach all major operating systems, maintain portability, and save development time and cost.

Ionic can be used to build progressive web applications but it would mostly be used as a component library so other technologies will likely be required. Still, Ionic is an excellent choice if you plan to launch your PWA as a native application on multiple operating systems.

PWA builder a tool to wrap and convert existing applications into PWAs. PWA builder was created by Microsoft to promote PWAs and make it easier for them to transition into desktop applications hosted on the Microsoft store.

PWA Builder has made developing PWAs far easier. PWA Builder is even being integrated into tools like Ionic natively or through extensions so that once you are done building your web app, you can turn it into a PWA with a line of code.

Are PWA’s the Future of Web Development?

PWAs are often referred to as the future of developing web applications and websites. PWAs in time will likely replace responsive websites, especially as PWA development becomes increasingly automated. The advantages PWAs have such as notification support, better interactivity, and overall higher quality make them a much better choice for modern web interaction than responsive sites.

However, PWAs will take a long time to catch up to applications built natively for individual platforms. This is because PWAs cannot take full advantage of the operating system they sit on. They are effectively just a web page.

The flip side is that organizations like Google and Microsoft are putting their weight behind making sure PWAs become a viable alternative to developing apps natively. As the frameworks to build PWAs improve, performance may soon be close enough where users can’t tell the difference between a PWA and a native app.

Responsive sites will not be going away. Responsive websites allow businesses to develop a website quickly and inexpensively. Most businesses also only need information websites or blogs and therefor shouldn’t waste time or money on building a PWA.

Should You Ever Avoid Developing PWAs?

Many businesses these days develop both native apps and PWA versions of their apps. The twitter Lite app is an example of a very successful PWA. The native twitter app has more features such as sliding UI elements for high end devices, while the lite version only allows users to click on UI elements. But otherwise, the two versions perform similarly, and the Lite version allows twitter users with weak devices to use the service unhindered.

There are 2 situations where you shouldn’t consider a PWA.

The first is if you have a website which is information/a blog and have no interest making it available as a native application on multiple platforms. Informational sites and blogs have very few interactive elements and likely no need for features like background refreshing or caching. There are workarounds for blogs where you want to alert users of new articles via push notifications.

The second is when have neither the skills to build a PWA or want to hire a developer. If your site lacks elements that must be updated on a single page, you can simply opt for a responsive template from a place like Themeforest then use a program like Dreamweaver, Visual Studio Code, or your web browser’s built-in HTML viewing tools to craft your site. Another popular choice is using a CMS like WordPress which has a built-in visual editor ad plugin to provide bonus functionality.

PWAs are becoming increasingly common. Their portability and the ease of development allows developers and organizations to save time and money vs building apps in native SDKs for different platforms.

Frameworks like React, Angular, and Vue.JS are making development much more efficient and approachable for new or transitioning developers.

ZebraHost’s clouds are a scalable solution for hosting PWAs. We have helped developers bring their applications to the cloud for over 21 years. You can check out our plans and pricing here.